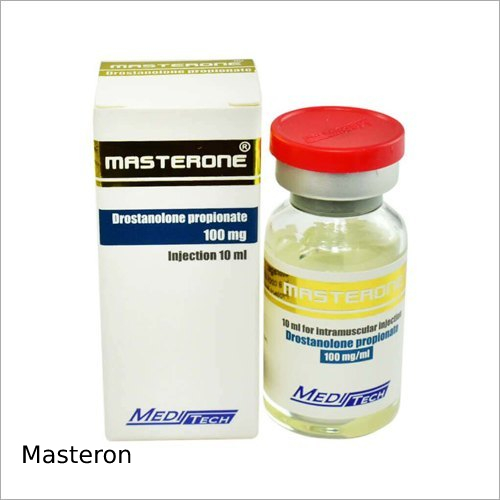 Masteron-Drostanolone is one of the best cosmetic anabolic steroids in existence thanks to its strong Dihydrotestosterone (DHT) structure. Those who compete, model, or just want to look hard and ripped will choose to use it as part of their cycles.

It isn’t a good steroid for those who want to add tons of mass or get very strong in a short amount of time. On paper, it has one of the lowest androgenic numbers (4X less androgenic than Testosterone) and that is reflected in its real-world effects.

Masteron (Drostanolone) was brought to market around 1972 by Syntex Pharmaceuticals, the same company that brought Anadrol to market just a few years earlier. The medical objective was to help control breast cancer in females using its mild anti-estrogen properties. As the years went on companies have depended on SERM’s like Nolvadex for this purpose since they have much lower side effects, and Masteron has fallen out of favor in the medical community.

Even though it was around in the golden era, it never got in the hands of many bodybuilders to their dismay. In those days before the internet, people depended on word of mouth and gurus to guide them so information was extremely outdated. Had they known about Masteron in that time period it would have been likely the #1 steroid to use.

Over the years it has grown in popularity and over the past 30 years, it has become a staple to use in a contest prep cycle to give the bodybuilder hard muscles on stage.

DHT is a sex hormone that will metabolize in small amounts in the body from Testosterone. Drostanolone is as pure a DHT (dihydrotestosterone) derivative as you will find out there thanks to the addition of a carbon 2 position methyl group. To make matters even sweeter, Masteron is even more anabolic than straight DHT that would be produced in the body.

Because it is a pure DHT derivative, this means it cannot aromatize into estrogen in the body. It will have some anti-estrogen properties as well.

Masteron added to an existing cycle will make the other steroids more powerful. It also can help alleviate some estrogen and progesterone issues. There is some thought also that stacking it with nandrolone will offset any sexual side effects since those steroids increase DHN (dihydro nandrolone) in the body and Drostanolone increases DHT. Consider it a great balancer of hormones.

Just like all steroids, it will work to increase protein synthesis and red blood cell count, but it will do it mildly. This is why using it by itself won’t do much of anything for you. However, what it will do whether you use it solo or in a stack is harden you up. It does this very well thanks to the way it is structured as we talked about earlier. Expect very hard muscles (my massage therapist once told me she had never massaged anyway with harder muscles while I was on it), more vascularity, and a dry aesthetic look.

Finally, it serves a purpose in competitive sports because you can use it without fear of increasing your total body weight and being kicked out of your weight class.

The Propionate ester has a short half-life of under 3 days. The longer Enanthate version is 10-12 days.

The detection time is listed at 3 months for the Enanthate ester and 4 weeks for the propionate ester. There have been many fighters and boxers who have been busted for it since they can use it without fear of missing their weight class.

Masteron is indeed a mild steroid that is low when it comes to side effects. However, it is important to remember it still is a very strong hormone and should be respected. If you abuse it at high dosages or for an extended amount of time the chances of problems will increase substantially. Here are the main side effects:

Dosages in bodybuilding and stacking

Masteron is one of those anabolic steroids that should be stacked to take the most advantage of it. The standard dosage is going to be 300-600mgs per week depending on your goals. If you are using the shorter ester Propionate then inject every 1-3 days, with the longer Enanthate ester you can inject 1-2X per week.

Those who are competing love it because they can continue running it up to the day of competition without having to worry about any harm to their physique such as bloat. It is a great cosmetic drug.

Use in a cycle:

Using it in conjunction with harsher compounds is a good way to ‘add something’ without adding estrogenic risk to the cycle. It also binds very well to SHBG so it will enhance your cycle overall and make the other steroids work even better.

Those who are models or trying to look good for shoots or photographs will use the lower end of the dosage range to harden up their muscles and add vascularity.

Masteron-Drostanolone is not my first choice for a female to use, however, some advanced female bodybuilders have been known to throw it in a cycle at low dosages. Be wary of strong side effects.